After being a big fan of Jamie xx for around 4 years, I missed out on getting tickets to his last London date, but this time around my friend and I were prepared, so prepared that we managed to be one of the lucky ticket holders for his set in Alexandra Palace in February. His sets and gigs sell out in a matter of minutes, and this date was no different.

Part of the critically acclaimed British group The xx, Jamie produces his own music using samples and original beats to create euphoric melodies and upbeat dance numbers. Some of his most popular songs include the newly released I Know There’s Gonna Be (Good Times), Far Nearer, and Take Care with Gil Scott-Heron’s, which was also covered by Drake and Rihanna.

The venue had a projected album cover on the outside for the night, lighting up the area with rainbow hues and exciting the queues of people further that they’d be seeing Jamie inside.

Due to the lack of staff on the night at the bars and their inability to efficiently serve drinks a large number of people missed the first two songs, if not more of the set, leaving disgruntled people without their drinks as they wandered off into the main room. I waited 45 minutes for my drinks and entered the room when You’ve Got The Love started playing. The set its self started off with a tribute to David Bowie and a great opening song, Let’s Dance. 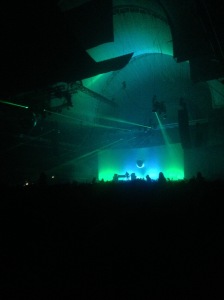 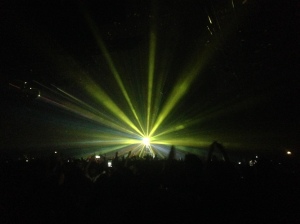 The whole night can only be described as a visual eyegasm of colour, which went hand in hand with his album In Colour. Throughout the night he played all 5 of his released singles from the album, Girl, Sleep Sound, Loud Places, Good Times and Gosh as well as smoothly mixing in anthems such as I Feel Love by Donna Summer which hyped up the crowd even further. Other non single, remixes and songs from his EPs and albums were played such as Far Nearer, NY is Killing me and Bloom. The music was non stop for a good hour and a half, possibly longer, but time certainly did fly with the prismatic spectrum of colours and general good vibes from the crowd. With each song Jamie mixed together, the crowd roared, cheered and danced along happily without complaints.

Some songs were played in segments and I would have liked to have heard more than around 20-30 seconds of some songs, for example only around 20 seconds of Far Nearer played before the next song came on, but I understand as it changed at the perfect point into the next song without it sounding off, but at least I heard a small segment of my favourite song.

It’s clear to see why Jamie xx continues to be a popular producer and DJ, with his seamless set list and ability to play a variety of music from himself and other artists to keep the crowd entertained and alive throughout the gig. He was definitely worth waiting to see and lived up to the hype. If you can manage to grab tickets to any of his sets I highly recommend seeing what he can do on the night.