After being a big fan of Jamie xx for around 4 years, I missed out on getting tickets to his last London date, but this time around my friend and I were prepared, so prepared that we managed to be one of the lucky ticket holders for his set in Alexandra Palace in February. His sets and gigs sell out in a matter of minutes, and this date was no different.

Part of the critically acclaimed British group The xx, Jamie produces his own music using samples and original beats to create euphoric melodies and upbeat dance numbers. Some of his most popular songs include the newly released I Know There’s Gonna Be (Good Times), Far Nearer, and Take Care with Gil Scott-Heron’s, which was also covered by Drake and Rihanna.

The venue had a projected album cover on the outside for the night, lighting up the area with rainbow hues and exciting the queues of people further that they’d be seeing Jamie inside. 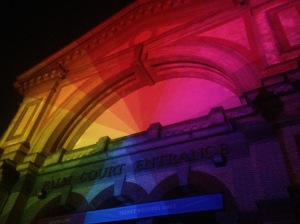